You are here: Home / Conflict Resolution / Here is a Crucial Conflict Management Skill You Have Never Heard Of We all know there’s something self-perpetuating about conflict.

It starts in childhood with the whole “You started it!” debate. “You hit me first, so of course I had to hit you back!”

“Oh yeah? Well, you hit me harder than I hit you, so now I’ll hit you again to make us even.”

And around and around we go, with small skirmishes turning into all-out wars. Each side feels justified in keeping the conflict going until it has reached a “fair” resolution. Problem is, my definition of “fair” might be the exact inverse of yours. I want to stand, vindicated and triumphant, on the moral high ground while you grovel below in your shame. But in your own picture of a “fair” conclusion, our roles are very likely reversed.

Have you noticed that even the language we use during conflict suggests that something has been knocked off-balance in the relationship, and that balance needs to be restored?

This sense of imbalance and inequality is grounded in the Parity Principle, a term originally coined by author and theologian William MacCarty, DMin. You may have never heard of it, but I bet you’ve used it without even knowing it.

What is the Parity Principle?

The Parity Principle states that relationships strive for equality and will do whatever is necessary to achieve it.

The next time you sense something like that beginning to happen, catch yourself before the conflict spirals downward out of control. This principle can empower you to rise above the conflict and focus on ways to resolve it, defuse the stress, and help the other person feel okay about the relationship again. 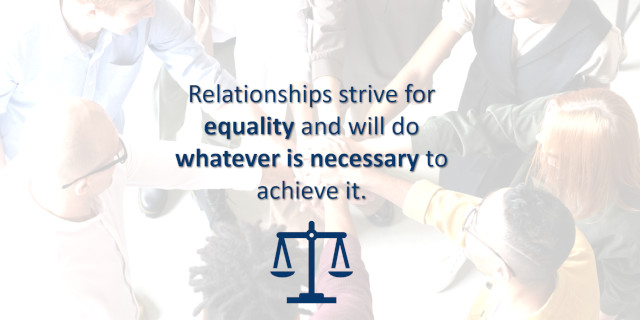 Understanding this will help you recognize some of the underlying forces at play in many stressful relationship conflicts. But even better, learning to use the Parity Principle will give you a remarkable amount of control over many conflict situations.

Let’s illustrate this with two people we’ll call Mary and Joe. Joe and Mary could be work colleagues, employer and employee, friends, or even romantic partners. The beauty of this principle is that it applies to both professional and personal relationships.

A balanced relationship feels like a balanced set of scales. Deep down, we know that for any relationship to stay healthy, it needs this sense of equality or parity.

What disrupts parity in a relationship?

However, there are plenty of things that can imbalance a relationship.  You may recognize some of these parity disruptors from my previous post on how NOT to talk things out during conflict: When Joe criticizes Mary, or blames her, or brags on himself, Mary may feel a loss of parity in the relationship. She feels inferior, and at that same moment he may likely feel superior. The Wrong Ways to Establish Parity in a Relationship

The parity principle says that when someone feels unequal in a relationship, they will do whatever they think is necessary to feel equal again.

Some common strategies are:

Most of us don't go around consciously planning what we can do to maintain equality in our relationships. Parity disruption is just something you feel down in your gut.

But the common responses people make to reestablish parity are ineffective and even counterproductive. Why? Because they all tend to overshoot the mark.

Let’s say Mary responds to Joe's criticism with defensiveness and countercriticism of her own.  She's subconsciously trying to reestablish a feeling of equality in the relationship. Will it work?

Not likely, if Joe then feels attacked and depreciated.  Without consciously realizing it, he feels like the relationship is out of balance the other way.  And how is he likely to respond?  By further defensiveness and countercriticism, or perhaps by silence, shutting Mary out entirely.  And unless something happens to break this cycle, the relationship can just keep spiraling downward from there, resulting in greater and greater stress and strain. How to foster parity in relationships

First, affirm your own value—it hasn’t changed. Our self-worth is not dictated by successes or failures or what others think of us.

Then, affirm the value of the other person – it hasn’t changed, either.

Affirm that the issue that disrupted parity matters. But search for the objective truth involved because it’s often deeper than the surface issue suggests. Perhaps Joe and Mary are bickering over one thing, when really, it is merely pointing to something else, like disparate levels of power, control, or respect in the relationship.

Finally, determine what would foster parity, and act on it (while not compromising principle in the process). This may include apologizing and making amends for our wrongs and creating a culture of mutual appreciation and respect in the future.

This doesn't mean that some criticisms may not be valid and or require that we make some changes. But have you ever been involved in a conflict that started with some minor criticism and then escalated into an all-out war? Most of us probably have. Often it's the law of parity at work.

The next time you sense something like that beginning to happen, catch yourself before the conflict spirals downward out of control. Remind yourself of the Parity Principle. It can set you free, empowering you to rise above the conflict and focus on ways to resolve it, defuse the stress, and help the other person feel okay about the relationship again.

I also work with business and healthcare leaders who are dealing with stress and overwhelm. If you are struggling with your stress, consider visiting my business website

find out how to get one-on-one coaching

If you found this valuable, click below to buy Dr. Coburn-Litvak's latest book, Leaving the Shadowland of Stress, Anxiety, and Depression: